N was in Melbourne again! Since we were going to Europe soon and we've had a lot of Asian food lately with my parents being around I wanted something different. I heard TGI Fridays had opened up recently in Melbourne Central so thought we'd go check it out - had been meaning to go to the Jam Factory one a few times but never got around to it. We were hungry and were wanting lots of meaty unhealthy American food =D

We got there at 6pm on a Saturday night and omg there was already a 30 minute wait =/ since it was still early we decided to wait and starve ourselves a little bit first. They gave us a buzzer but said the buzzer only works right outside the restaurant so what's the point of having a buzzer might as well just call out names but anyway =/ we went for a walk and came back in 20mins and our buzzer went off - yay!

It's got a very American feel inside but not as much as Misty's Diner =P still has the red booths but also has a bar and large screens for watching sports - so a mix between Aussie bar and American diner? It's not actually that big inside - didn't think so 'cause China Bar wasn't that big beforehand anyway, so no wonder there was a long waiting time.

P wanted to get a jug of Sangria or something to share but they don't do jugs here =/ so we just got a glass.. Sangria - good news, we spiked the punch! Tropical juices and red wine combine for a fruity flavour that's all grown up $9.25 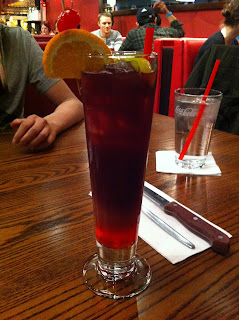 Thought it'd be bigger than that =/ It was alright, wasn't as fruity as we'd have liked it and they put way too much ice in it.

I had a buy-1-main-get-1-free voucher so we decided to get an entree and 2 mains to share. For entree we got an appetizer to share. Friday's Three For All - a winning combination of loaded potato skins, juicy pork riblets and tangy buffalo wings. Served with sour cream and spring onions, BBQ sauce, Bleu Cheese dressing and celery sticks $29.95 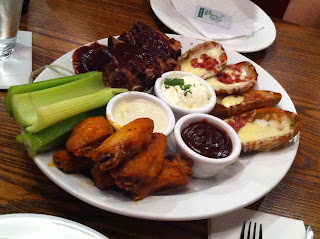 This was huge! Their loaded potato skins are their specialty - cheesy and bacony, would be nice if the skins were crispier though 'cause they were a bit soft. The buffalo wings were really good - delicious with the bleu cheese sauce! I love pork ribs, and these were delicious and fall-off-the-bone but there were lots of little bits of bone which you can't really see - I bit right into where I thought was soft meat and really hurt my teeth - happened a few times =(

P loves his fajitas so when he saw there was a tower he insisted on getting it. Char-grilled Chicken & Beef Sizzlin' Fajita Tower - one-and-a-half feet of Sizzlin' Fajita fun. Char-grilled chicken and beef served on a platter of grilled onions and peppers. Wrap the meat and vegetables in warm flour tortillas, then topped with cheese, sour cream, pico de gallo and guacamole $28.95 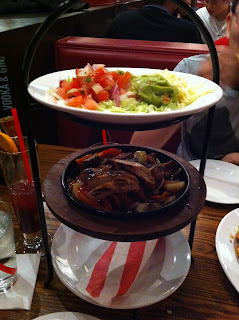 After the massive entree platter we were slightly disappointed at the size of the tower. Yes it was 3 levels, but there wasn't that much meat on the sizzling plate and it definitely wasn't sizzling when it came to our table unlike at other restaurants (Taco Bill, Fiesta Mexican). Flavours were good though, not spicy at all which we liked =) Though they were very generous with the soft tortillas (about 6 or so?) compared to Fiesta Mexican's measly 3!

For the second main we got Jack Daniels Half Rack Ribs & Shrimp - a half-rack of Cajun-spiced baby back pork ribs, char-grilled and glazed with our Jack Daniel's sauce, with a handful of our Cajun shrimp, battered and fried, served with crispy fries $34.95 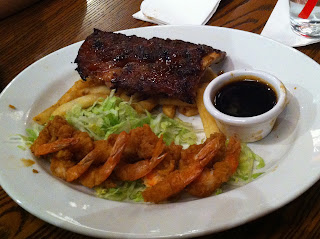 P and N wanted prawns and I wanted ribs so we got both! But we were a bit disappointed at the size of the dish - I know it says half rack of ribs but it was a very small half =( This rack also had little bits of bone in it so hurt our teeth again =/ The prawns looked a bit tacky with bits of the batter falling off the meat so they weren't not properly battered - still it was quite tasty with the Jack Daniel's BBQ sauce. Chips were good though - nicely seasoned and crispy.

P was a bit disappointed with the main dishes so didn't want dessert here =( I had wanted to try the Brownie Obsession - a warm brownie covered in hot chocolate fudge sauce, vanilla ice cream, caramel sauce and chopped pecans $12.95 - picture looked so tasty but we decided to go elsewhere for dessert.

Food~
4/10 - quite overrated and expensive for what you get, we still spent like $30 each even though we had a voucher, what if we didn't?! would have recommended the ribs if not for the many little bones in it =/

Atmosphere~
3/5 - the waiters here are very in the mood, they sing this TGI's birthday song for birthday guests (3 times in the one night!) and they're all into it so was quite entertaining. There wasn't any big sports match on tonight or I'd imagine the bar would be very loud. You can sit inside or outdoors on the balcony - would be nice on a summer's night but not right now in this cold =P

Service~
3/5 - service was alright on this night, read other ppl had to wait ages for their food but ours came relatively quickly

Posted by foodlovesmymouth at 9:29 PM

I love eating out and taking photos of food - end result is amateur food blogger! =)
Please be nice ^^